How to make Jenkins aware of Git branches

This time I want to talk about something "totally" different. Something just from work.

At work we recently changed the revisionsystem to Git to meet our requirements in feature driven development using a lot of feature branches.

To fulfill our high standards in quality and stability we moved over to a silently different workflow where QA tests every feature branch before it'll merged in the final release. The day where the deployment meeting takes place it'll decided which branches are stable and will be merged into the actual release branch. To make it more convenient for our QA to build, deploy and test branches we setup a bunch of QA servers (one server for each QA tester) and gave them the chance to build any branch and deploy it to a choosen QA server.

Since Jenkins currently has no real Git branch support (beside giving the branchname by yourself) we had to figure out how to tell Jenkins which branches are available. To do so we made a small shellscript which collects all of the feature branches into some properties file that later will be read by Jenkins.

In this blogpost I'll show the way on how this can be done since currently there's no complete documentation but a lot of hints that needs to be collected and made up in the right order.

So let's start which how do we find all feature branches?

We did a clean naming schema to be searched for - in our case (since we use Atlassian JIRA) it was quite easy to find it - just using the JIRA project key. So if your project would be "My fantastic new project" your JIRA could look like "MFNP" and any JIRA task is a combination of the project key followd by a task id, e.g. "MFNP-1337". So we named the feature branches after the keys including the summary written in uppercase "MFNP1337_SOME_NEW_IMPORTANT_ADDITION". In this case everyone knows the JIRA key and can search for further information on that special branch.

Ok now we know how the branches are named and we see that searching for feature branches just means "looking for branches starting which "MFNP". This is, thanks to the great toolset Linux provides, just a matter of calling the right commands and pipe output from one to the next.

So let's enter the shell of the Jenkins buildserver and start over with cloning the interesting Git repository (a bare repository should work as well but we haven't tested).

We know have a now repository clone we will use for further work which our shellscript "/home/jenkins/build-branches.sh". So how does it look like?

This script will update the actual repository using the latest available changesets and grabs for all remote branches using the naming pattern "origin/MFNP" since we're searching only for remote branches. The result is piped into a properties file called "branches.properties" using the property key "branches=" which will later be needed by Jenkins.

To update the properties file on regular basis just add it as a cronjob.

Now the build-branches.sh file will be executed every minute which is fast enough to quickly find new feature branches in Jenkins. So let's move on the the last stage - the Jenkins configuration.

After the plugins are installed we go on which creating a new job (or copy one of the existing configurations - this is our case since we have a fairly complex build) and change it the way we need to manage build by using the branch selection. We give it the simple name "GIT-BranchSelection" and toggle "This build is parameterized". In the revealing properties we add our previously created properties file. We name the property "branches", give it a nice description and the type "Single Select", as well as adding the full path to the properties file in "Property File" and the property key which we defined as "branches" in the shellscript. 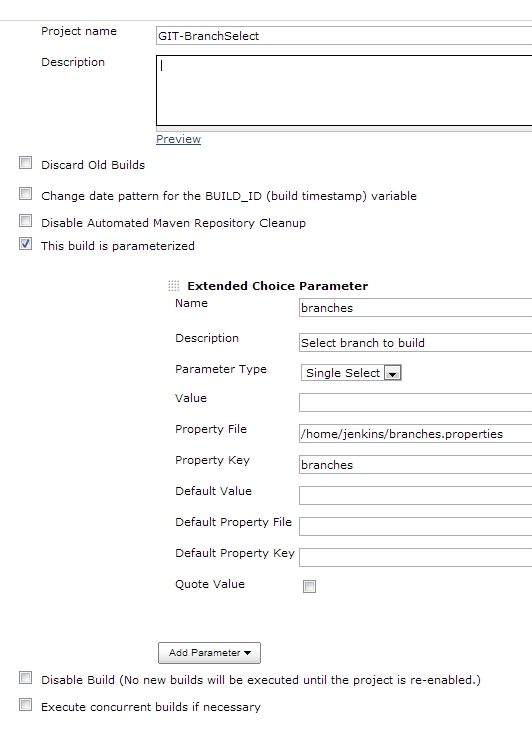 In the Sourcecode Managenemt we select Git as our repository and enter the URL of the remote repository (Jenkins will use it's own clones while building, it is not using the one created above!) and leave Name and Refspec blank but we fill in the previously configured property into Branch Specifier by setting it to "${branches}". 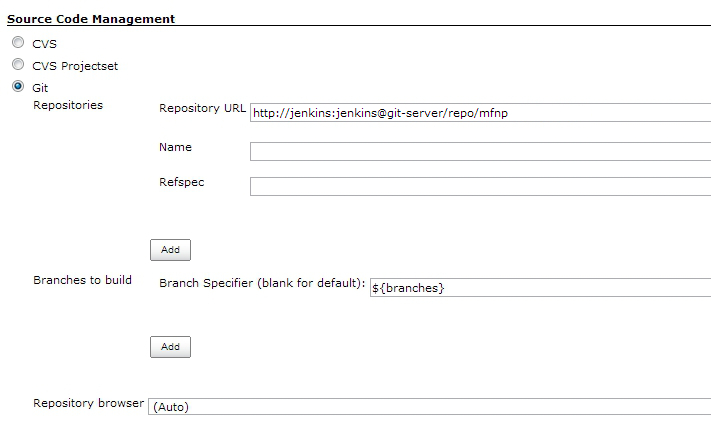 Save the new configuration and you're done. If you click on "Build Now" it should look quite similar to the next picture - just select the branch to be build and kick it.

Just started a discussion about the first ideas on how to implement Properties in Java. Many of you possibly know Properties from other languages like C#. I would be happy if anyone of

Lightning, the highspeed and low latency serializer for the Java environment will move it's way onwards to the Apache Software Foundation. Born from the discussion to add a serializer connector for Lightning to

Sourceprojects.org
—
Jenkins and the Git Branch Selection -
Share this